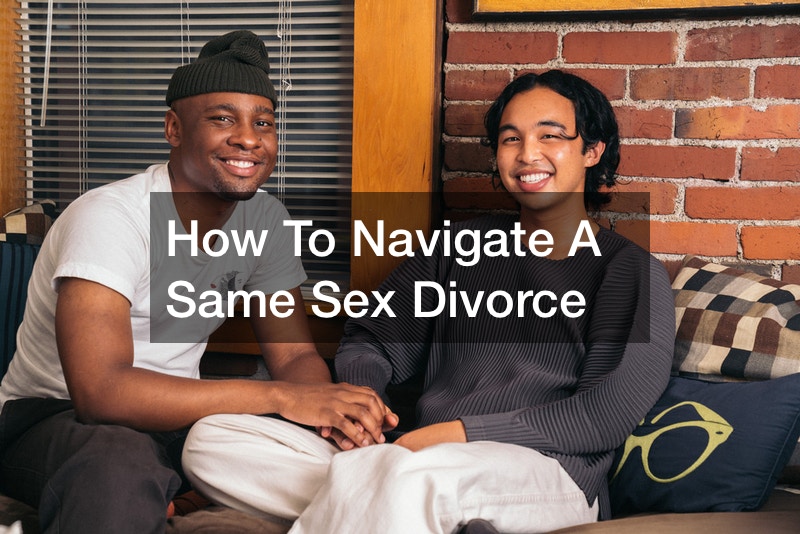 Although same sex marriages have become largely accepted in various states, the same progressive culture has not been afforded to the divorce process. As a result, estranged same sex couples may find themselves frustrated trying to navigate their way through divorce because of lengthy or unaccommodating procedures

Same sex divorce laws keep changing and can complicate the process even more. Therefore, you need to keep abreast with the changes for a quick and easy process. Fortunately, there are some essential tips you can apply to make the process less tedious. However, before you follow these tips, you need to fulfill some requirements before you carry out a successful divorce.

Registration of partnership – to apply for a divorce, you must possess legal documents that act as proof of marriage such as the marriage certificate and the same sex union is recognized in the state you reside in.

Residency status – each state has specifications on the minimum period the spouse filing for divorce should have lived in the said state. Your driver’s license is a piece of evidence that can prove your residency status.

Legal grounds – the grounds for applying for divorce must be recognized by law. Some states have limited options as grounds to dissolve a marriage. Your lawyer for same sex divorce in Canada will assist you navigate through this stage.

Jurisdictional boundaries –Since same sex marriage is not permissible in some states, it is important to file within your area. Any same sex divorce application must be filed with the proper court.

Waiting period – same sex divorce in Canada requires that couples filing for a divorce adhere to a mandatory waiting period before a divorce is finalized. The period differs in each state and your lawyer will assist you to file all required documents as you wait for the period to elapse.

There are other steps you will need to take in order to get a divorce.

Step One: Be Sure

Divorce is a life altering decision so you want to ensure you are making the right one. If you are still unsure whether to file for a same sex divorce, you can ask your lawyer to help you explore other options. That is the purpose of the waiting period to allow you to rethink your decision.

Divorces are expensive. It is advisable that you start putting money aside to cover the attorney’s fees. You will have to consider an alternative living situation in case the settlement does not grant you ownership of your current house. Your finances should also be in order whether you have joint or separate accounts. The last thing you want is to have your accounts frozen while the court figures out the division of assets living you in a struggling position.

All critical documents to the divorce need to be in close range. For instance, the spouse filing for divorce should store prenuptial agreements, marriage certificates, insurance policies, and tax returns safely and securely. Wrangles during divorce could cause one spouse to interfere with these documents and delay the process.

Whereas the services of a divorce attorney are recommended, you need more than just legal support when undergoing a divorce. The process can cause a strain in your relationships, affect your children, and lead to depression. Women are known to be largely affected by undue pressure and may need additional support for their mental health. Many womens health care clinic will be a good place to start to get the much-needed mental support.

Why You Need a Same Sex Divorce Lawyer

Legal aspects of a same sex divorce are unfamiliar to normal people. The validity of grounds for divorce, division of property and custody matters is a new phenomenon to couples filing for a divorce. A spouse may not be aware that some issues are best handled through mediation rather than going through the divorce process. Hiring an experienced lawyer, preferably one in the same state as you will give you access to relevant legal knowledge and help you make informed decisions. An experienced lawyer can propose viable options that are acceptable to both parties and prevent messy issues from landing in court. For instance, a lawyer can recommend a spouse that has an alcohol addiction for addiction treatment, or if they have had too many run-ins with the law while driving, for an advanced dui training at their discretion to prevent the children from witnessing them in an unusual state. Seeking legal representation ensures that you have adhered to all legal compliance.

Expert Assistance On Custody And Division of Assets

Custody and asset division are some of the most contentious issues in any divorce settlement. Typically, the divorce is not anticipated and both parties engage in a tug of war to reap the most benefits out of the marriage. A same sex divorce attorney is well seasoned in the industry and has come across similar cases. The lawyer will develop a strategy on how to best approach the issues in the least stressful way. Issues such as health insurance and who will be covered by the family practice physician may come up. With a lawyer, you will explore the best possible solutions and negotiate on what is agreeable to avoid the many pitfalls that come with same sex divorce cases.

Both partners in a same sex divorce experience stress during the process as a lot of emotions are involved. With undue pressure, it might be hard to remain objective on a number of issues. Failure to view things objectively can lead to losing sight of the real problem and pulling children, family, and friends into ugly fights. Having a lawyer will help you put things into perspective and remain objective throughout the process. The divorce process will be faster and easier when an unbiased party is the voice of reason and helps relieve the tension.

Filing for a same sex divorce in Canada involves a lot of paperwork. By hiring a divorce attorney, you streamline the process and avoid common mistakes made by other couples. A lawyer will help you fill out the forms correctly and avoid any errors that can delay the court’s ruling. You save a lot of time and money by hiring a lawyer and get your divorce finalized on time.

Everything You Need to Know About Same Sex Divorce

Same sex divorces are unique and come with legal issues that couples need to be aware of. It will be advantageous to seek the services of an experienced lawyer who deals with same sex divorce in Canada.

The marriage act for same sex couples has continually been updated over the years, which may affect the application of same sex divorce in Canada. Before it was legalized, the union was referred to as domestic partnership and later changed to marriage. Some states converted the partnerships to marriage while others are yet to do so. It is the duty of your divorce lawyer to find out whether the status of your partnership was converted and begin a secondary process to dissolve the union if not.

Children in a same sex marriage can be through adoption or assisted conception. During a divorce, disputes may arise about who gets custody of the child or children. Understandably, each parent will fight for custody rights of the children. If a child was born before the legalization of marriage, it is critical for the non-biological parent to adopt the child legally. Otherwise, the non-biological parent risks the possibility of being denied custody rights. Family law differs in each state and outcomes may vary on who gets custody of the children. For example, for same sex divorce in Canada, in the case of adoption, the non-biological parent may not be awarded any parental rights if the other parent comes into the marriage with the child. A custody lawyer will help sort out the custody battles and ensure the child in question is not suffering. It would be wise for couples going this route to opt for a mediation attorney to avoid subjecting the children to court summons.

Alimony is usually a complicated issue for same sex divorce in Canada, especially if the couple started as a domestic partnership. The award of alimony is dependent on a variety of factors such as financial need and the ability of the other spouse to pay. Generally, for same sex divorce in Canada, the award of alimony will be based on the period of the marriage and the financial ability of the earning spouse. The years outside legal marriage may be considered in some cases and palimony awarded. The claim is usually based on the years the couple lived together before the union was legalized. A big part of divorce is to ensure the couple part ways with as minimal disruption as possible. If the two parties cannot agree or are being unreasonable, divorce litigation may be necessary to minimize conflicts and keep the case out of court. Divorce litigation takes the matter to family court rather than divorce court to resolve the issues. Issues such as child and spousal support may present unique concerns outside the divorce jurisdiction, hence the need to engage a family court to resolve matters outside the scope of divorce.

Same sex divorce in Canada is no different from heterosexual divorce when it comes to property settlement. The properties and debts acquired during the time of legal marriage will be the basis of division. The marital judge will decide that existing properties will be equitably divided to each spouse as well as any active home mortgage loans at the time of dissolution. Likewise, any property or debts acquired before the marriage are immune from property division and ownership retained by the initial owner. Ideally, same sex couples should explore alternative divorce resolution methods to avoid being held hostage by same sex divorce laws in Canada that might be restrictive.

The marriage act has undergone several amendments that affect same sex divorce in Canada. Same sex couples may find difficulties dissolving their unions, especially with each state having its own set of marriage laws. Your lawyer is required to explain to you the marriage laws that apply to you and advise you on how to go about the issue.

Whereas some states may recognize both residents and non-resident same sex marriages, some do not allow non-resident same sex couples to divorce. Couples may not be allowed to apply for divorce in their current state if the marriage is not recognized and judgment may not be delivered. However, same sex couples wishing to divorce but do not currently reside in Canada are allowed to apply for a divorce even if their current state does not recognize the marriage.

Although the divorce process is not fun, it does not have to be expensive, complicated, and lengthy. You have to assess the situation and ask for help when you need it. Remember, the goal is not to win but to reach an amicable agreement where both parties get equal and fair treatment. Keep in mind that same sex divorce laws are constantly being amended so you might want to save yourself from a full-blown court battle that could end up causing a rift in your family.